Posted on February 27, 2013 by thepoetrygardenblog

A month of contradictions and surprises, the end of Winter and the beginning of Spring.  A shift in the seasons always leaves me feeling a little…confused, distracted by the changes in the world around me. But the days are lengthening and there are newborn lambs already in the field in the village next to our town by the sea.  So goodbye February.

Three lines to see you on your way:

Facing a half-moon in the palest sky

Posted on February 4, 2013 by thepoetrygardenblog

So, here’s a poem to brighten up your day! It’s dedicated to my love for the colour orange.

Still striving to live by William Morris’ standard (you can read more about this here) and because the ceiling was falling down, we are decorating our dining room. Orange shall feature for sure.

Via the inspiring Curbly

Why Orange in a Poem

Orange is the colour of Robert

My friend for whom I make-believe adventures,

Saving the day because he is orange

In a world that isn’t.

And orange is reflected upon three walls.

And I realise there are songs still to be sung,

Skies to fall in love with,

And seas to sink in to.

Our longing to brush against summer-kissed limbs.

And this is why orange.

Posted on January 17, 2013 by thepoetrygardenblog

END_OF_DOCUMENT_TOKEN_TO_BE_REPLACED

Posted on January 5, 2013 by thepoetrygardenblog

I’m so keen to finish reading A Christmas Carol before the twelfth night! For fear, if I don’t, of being visited by a Christmas spirit all of my own, whose purpose is to show me my every miserable shortcoming…Fortunately, it’s not a big ask because I’m enjoying the book so much! Dickens’ prose is to fall in love with.

Well, the twelfth night is upon us. Usually I’m a little blue about it, wistfully putting away treasured decorations while contemplating the gloom and cold of January. But this year’s different. To start with, my spirits were lifted way up when I came across the January calendar page in the masterpiece Les Tres Riches Heures du Duc de Berry, supposedly the classic example of a medieval  Book of Hours. Created somewhere between 1412-1416 by the Limbourg brothers, find out more about it and its important place in art history here!

Isn’t is just fantastic?  Has there ever been a more vibrant, colourful, feast-inspiring, celebrationary calendar page for January? Surely not.

The Book of Hours, as well as calendar pages, is a book of prayers and other devotional exercises.  I’m not normally so drawn to the religious in art. But I have been thinking a lot about Love during the twelve days of Christmas this year. Love with a capital L. When I was considering which poem to post in The Poetry Garden over the holidays, I kept coming back to Love (III) by George Herbert (1593-1633).   As a student I remember feeling so frustrated that this poem was about a spiritual Love and not about a human love – which at 18 years old, was all that life (to me) was about. I see the poem so differently now and for some reason this Christmas, felt the urge to read it again, for the first time in years.  And then, totally by chance Samantha from The Lady Journal liked the Poetry Garden’s last post and so I checked out her blog and came across a poem she’d written that moved me so much. Please check it out, it’s beautiful.

And finally, last night we watched The Life of Pi (which I enjoyed – completely!) and again I find myself thinking about Love. Where’s it all going to end?!  Tomorrow, I shall cook something special and invite someone who’d be alone around to share it with us. I’m thinking baked camembert with rosemary and garlic, and roasted root vegetables. And I shall take down our decorations with a smile upon my face, dreaming of a January filled with happiness and spiritual growth. And from this year, I’m going to introduce our family to the medieval tradition of gift-giving in January. Bring it on. I’m Loving life.

Posted on December 28, 2012 by thepoetrygardenblog 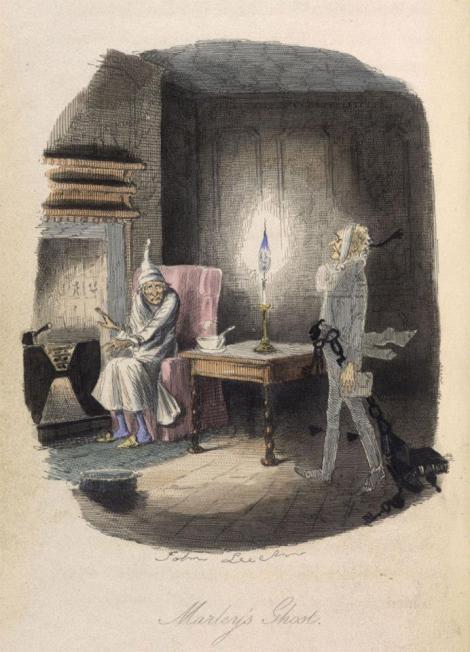 How can I have denied myself Dickens’ delights for so long?  Black-and-white, ‘times were hard back then’  TV adaptations and nostalgic images of Victoriana every which way you look (especially at Christmas) have been enough to satisfy. Up until now.  The Poetry Garden’s festive reading is A Christmas Carol by Charles Dickens and I’m love, love, loving it!

Here’s an extract to whet your appetite, so munch on a roasted chestnut, slurp on mulled wine and pull up a chair…

It was cold, bleak, biting weather: foggy withal: and he could hear the people in the court outside, go wheezing up and down, beating their hands upon their breasts, and stamping their feet upon the pavement-stones to warm them. The city clocks had ony just gone three, but it was quite dark already: it had not been light all day: and candles were flaring in the windows of the neighbouring offices, like ruddy smears upon the palpable brown air. The fog came pouring in at every chink and keyhole, and was so dense without, that although the court was of the narrowest, the houses opposite were mere phantoms.

Posted on December 7, 2012 by thepoetrygardenblog

Today is a ‘through clouds’  sort of day and I find myself totally drawn into the artwork of the late nineteenth and early twentieth century artist Arkhip Kuindzhi.   I recognise his paintings as I would an old friend and imagine myself happily surrounded by them. They suit where we live.

Here’s a poem I wrote, through clouds, way back when…

Write through the clouds, he said

And loved her with infinite breath

Blissful in, bountiful out

He was able to save a little for the skies.

Equally she loved him

Her king of all human-bound

His journey’s companion into the new,

Their collision a passion  for between the clouds.

Illuminated against a landscape of blue entirely their own

Shining, brilliant, as transparent as the emerald curl of their wave

He and she set off together

In search of what is between.

A World Beyond The Woods

Posted on November 26, 2012 by thepoetrygardenblog

Illustration from William Morris’ fantasy novel The Wood Beyond The World (1894).

Isn’t she gorgeous?  Feminine yet heavy-limbed, somehow earthy and other-worldly.

I love this illustration. And recently I’ve been thinking a great deal about its artist, William Morris  – nineteenth century poet, author, artist, interior designer, social and political thinker and commentator. (How interesting, by the way, does the recently refurbished William Morris Gallery look? I’ve got to visit.)

My brief flirtation with hibernation has ended. Now I find myself overwhelmed by the need to weed. Not to weed our garden necessarily – although our patch could do with the attention – but to weed my mind’s garden rid of all the stuff that gets in the way of what matters. It’s an old habit of mine to allow my head to get overrun with the unwanted. There’s no upside to it and it never ends well. And the good stuff – albeit imaginary, fictional good stuff – can’t grow if its shoots are strangled by bindweed. I need to reach a world beyond the woods.  And this yearning for a clear space is what made me think of William Morris – specifically of one of his most well-loved and frequently quoted ideals:

“If you want a golden rule that will fit everything, this is it: Have nothing in your houses that you do not know to be useful or believe to be beautiful.”

So simple! I’m going to try Mr Morris sir, to heed your wise words and to make a space in my head and home in which to be clear and honest, to live, be happy and create.  While I go and tackle the ‘unuseful’ in my head and the chunk in our hallway, take a few moments to lose yourself in these amazing Morris designs…genius.

Posted on October 30, 2012 by thepoetrygardenblog

No poem today. In fact I am in the mood for hibernation.  Is it possible to be anything but at this time of year?  A weakened sun seeps through autumn mists, illuminating burnished golds that I want to be wrapped up in. Daylight is brief, soporific and heavy with the smell of bed.  So with this in mind I’m posting a photo to energise and lift the spirits, or at least lift the chin. Eyes-up y’all!  I’ve heard it’s good for the soul.

Posted on October 26, 2012 by thepoetrygardenblog

Typically late in getting round to must-read books, I’ve recently read Jean-Dominique Bauby’s  The Diving Bell and The Butterfly.

“Once, I was a master at recycling leftovers. Now I cultivate the art of simmering memories.” Jean-Dominique Bauby, The Diving Bell and The Butterfly

What an intriguing read. Touching and direct,  it’s one man’s account of living with locked-in syndrome.  With no place for the superfluous, the book has at its heart a strong sense of honesty and a poetic, almost lyrical rhythm.  I find myself naively wondering whether Bauby’s economic use of language was an artistic choice, or a result of the means by which it was authored. How it was authored truly amazes me.  Bauby’s only means of communication following the massive stroke that left him “imprisoned inside his own body, unable to speak or move” was to use his sole functioning muscle – in his left eyelid. And that’s how he wrote the book: painstakingly spelling each word by moving his left eyelid in response to an alphabet “rearranged according to the letters’ frequency of use”, recited over and over again by his bed-side assistant. Astounding.

Reading The Diving Bell and The Butterfly has been a hugely relevant and timely experience for me. Firstly, my putting the book down coincided with Tony Nicklinson‘s passing, less than one week after having lost the legal battle to end his life as a sufferer of locked-in syndrome. His story was everywhere and rightly so.  On a more personal level, over the last few years my family has been coming to terms with slowly losing a loved one to dementia and the effects of a brain tumour. I don’t like using the word ‘losing’ because it implies an ownership of some sort. And nobody owns anybody. It’s complicated, it’s often painful and it’s ongoing.  Here’s a Kate Banks poem on such matters for you…It’s called The Slip.

Can you catch me? I’m falling.

Eyes paled by the fading of the light,

With an imperceivable, momentous edge towards the beginning,

a raging scream so silent it is not heard,

and a thrashing so still it is not seen,

Is this where his eyes, distilled by the paring down of life,  are focused?

On a place from where babes born yet not wholly present,  slip into our world;

A place to where those held by tubes, machines and progress have already gone?

Can you help me? I’m falling.

By the way, I’ve not seen the 2007 film The Diving Bell and The Butterfly (here’s the mesmerizing trailer), though I do love Ronald Harwood’s work as a rule. It looks as if the appeal of the film is in its glorious cinematography but I found Bauby’s personal account so raw and honest that I fear I may resist and resent being manipulated by the film.  And I can’t pretend I haven’t read the numerous reports of misgivings by Baubys’ friends on the film’s ‘take’ on his life. If I change my mind and watch it, I’ll let you know…

Advice to Those In The Pink

Posted on October 4, 2012 by thepoetrygardenblog

END_OF_DOCUMENT_TOKEN_TO_BE_REPLACED

The Poetry Garden is a sanctuary for my creative meanderings. So please, have a wander through the poems, prose and pictures. Thanks for dropping by!